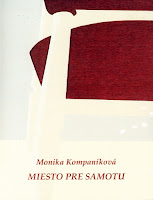 Monika Kompaníková’s short story debut, to borrow from Ivan Krasko, „resounds with a shy accord“. What the debuting author apparently offers is a six-pack of diverse stories on the loneliness of introverted individuals, representing »minor« lives and abiding a space beyond normal human life. Their defilé provides the opportunity to gain insight into the inner world of loners confronted with the life’s stagnation and stereotype.

The opener, Miesto pre samotu, already sees the essential question, namely, what to make of the interconnectedness of both substances in the eponymous title of the book. The issue, though, is not whether or not loneliness should or should not have its place in the life of a human being – albeit initially, this assumption does find ground – in deed, what we encounter is a state of mind where a specific need remains unfulfilled. The primary assumption would be unreasonable to address as loneliness understood in terms of a voluntary intimacy is one of life’s necessities. Kompaníková’s loneliness is, then, anchored in the author’s own mind who is trying to compensate a need of unique kind of satisfaction.

Deep down, Aristotle‘s zoon politikon is paradoxically a loner, longing for intimate contact wherein only lies the possibility to succumbing to, accepting or resisting the intensity and form of being lonely. This way, the protagonists are sensitivized in their perception of the outside world. A most prominent example of this seems to be the story Mantis, presenting two people as conceptual opposites. While the main protagonist young Tereza finds „this life rolling from one side to the other“ pleasurable, the character of a forty years old woman needs acti vity to be able to overcome her feeling of being “buried alive”, yet, ultimately, lacks the necessary vita lity and remains imprisoned in daily routines.

Loneliness is a kind of universe, where details become essential for existence. The closed entities are mapping their own universes, getting to know their structures. Lucia of the first story uses “eyes and nose sensitive to tracks people leave with things, their smell in rooms, imprints of a grease complexion at furniture and window glasses”. Her “soothing constancy of life”, however, is prone to outside intervention. When, in the end, the system breaks down, demolition of a dilapidated building, Lucia and her observed objects are suddenly all at the same level. They become translucent, even invisible, after all, they became white dust “as the workers drove them away” and nobody noticed they were in pajamas and barefoot.“

The author does not primarily explore the shattering restlessness engendered by unwanted loneliness, or the involuntary monotony, hence, some sort of literary sketches not unlike the illustrations in text rather than deep psychological analysis are at work here. In brief, the shattering loneliness is peripheral, failing to reach completeness; although perceivable, it is so in very tiny and inconclusive indications. Kompaníková manages to circumvent this either by employing the devices of absurdity or simply by escape, as is the case of story Slávko.

What, then, amounts to the unifying element more or less capable of mitigating loneliness? Without a doubt, it is the intimate contact, longing for a touch. Making a place – that is otherwise occupied by loneliness – abound with something sensitive and sensual is perhaps the essential meaning of togetherness. Sexuality in its biological and emotional form becomes the vehicle for filling out this place. “Even water is capable of touching” says the omnipotent narrator in the closing story, yet Klára wants to be water that spills out and becomes soft. Physical love becomes a source of new quality for Ema in the story Hladina ustálená (Stable Level). “She shook herself, growing dark with a tickling sensation in her underbelly triggered by his touch. She was hot but the water was soothing. She could feel the man’s fingers – or was it watering traveling down her stomach – running lower and lower, sensing their pressure and heat under her bath suite.”

For her young age, Kompaníková’s texts indicate the opening stage of her creative development, and some of her stories could benefit from several final touches of her more experienced colleagues. Nevertheless, the accord resounding in the words is well-tuned and opens prospects of vital compositions yet to come.

Published in the Slovak Literary Review.